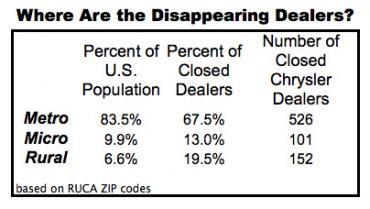 An analysis by the Daily Yonder shows that the 789 dealerships that lost Chrysler franchises are disproportionately rural.

The analysis estimates that 32.5 percent of the closed dealerships are outside metropolitan areas, which according to Census Bureau estimates have 16.5 percent of the U.S. population. The most rural areas, in which 6.6 percent of the population lives, will lose nearly a fifth of all the dealers Chrysler chose to close, Julie Ardery reports. (Yonder chart) The analysis was based on rural-urban commuting area codes, which draw distinctions below the county level and include a "micropolitan" designation for urban areas not large enough to be metropolitan.

Some in Congress, like Sen. Byron Dorgan, D-N.D., were outraged. "Watching it all," he told the Senate Commerce Committee, "I'm wondering, who's making the decisions in this country about who's too big to fail and who's too small to matter." (Read more) General Motors has not revealed its list of dealers to be closed but has said it would retain the largest presence of an automaker in rural America.
Written by Aubrey Krekeler Posted at 6/12/2009 01:43:00 PM