Shrinking manufacturing base in rural areas has big impact, especially on those close to retirement 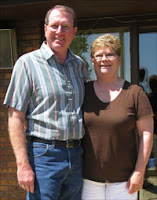 Stable farmland prices provide a financial cushion for farmers, but rural Americans who relied on manufacturing jobs aren’t feeling quite so lucky. In a followup to his story on land prices, Howard Berkes of National Public Radio reports that the trend of closing rural factories has accelerated with the economic downturn.

Randy Badman (right, with his wife, Marge, in photo by Berkes) was laid off in 2005 from the original Vise-Grip plant in DeWitt, Neb., after 36 years of service. He has since been laid off two more times and lost 40 percent of his 401-K. In October 2008, the plant closed and moved to China.

Such an exodus has left people like Badman searching for jobs and facing a bleak economic climate that is arguably worse in rural areas. Ernie Goss, an economist at Creighton University in Omaha, told Berkes that the loss of companies in rural America leaves much a bigger footprint because of the limited infrastructure of small towns. When businesses close and people leave, or are forced to leave, "The burden of the infrastructure costs is spread among fewer and fewer individuals and fewer and fewer families," Goss says. "If every one of those retirees could take a chunk of the infrastructure with them, [which] would not have to be paid for by those who remain, you'd be OK. But, you've got schools, the sheriffs' departments, the county court clerk. All these are affected by this. It's not a small thing."

To survive, people like the Badmans, who were close to retirement, are having to rethink their future plans. They are part of an effort to get a new company to move into the vacant Vise-Grip plant, but the tough economy is a major obstacle they face. While Goss told Berkes he expects the situation to improve, "It's hard to tell a person who's over 50 years of age, 'Well, just hang on for another 5 to 10 years. It'll get better.' " (Read more)
Written by Aubrey Krekeler Posted at 6/09/2009 10:39:00 AM

There is a great book out there called Manufacturing a Better Future for America that anyone who is interested in the revitalization of manufacturing must read. America needs to be reminded that manufacturing is what built our economy so many years ago, and that we should look to it once more to drag us out of the economic mess our country is facing.

Furthermore, the economic mindset of our government and our business leaders needs to be shifted. The practice of offshoring production has rendered millions of Americans jobless and angry. This book justifies why jobs need to stay on American soil, and how a paradigm shift in business economics is needed to prevent this recession from repeating itself. All in all, I highly recommend this book to anyone who is willing to help bandage up our broken economy.