Falling prices, oversupply, and an image-tainting salmonella outbreak in 2008 will likely result in a severe decrease of peanut acreage in 2009. Industry leaders and economists have called for a 25 to 30 percent cut in production to try and compensate for the events of the past year, and some farmers are bypassing the crop altogether, Roy Roberson reports for Southeast Farm Press.

In the past, contract prices for peanuts were a result of oversupply, and even then most came in above $500 a ton. Roberson reports that early in the planting season, the average price for the four peanut types grown in the U.S. hovered around $425 – enough to make a profit, but rarely enough to also pay for crop insurance, North Carolina peanut specialist David Jordan told Roberson. Since then, the average has likely decreased further, and for some growers, contracts can come with reduced pounds. 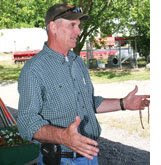 In Suffolk, Va., grower John Crumpler (Farm Press photo) told Roberson that many growers in the area set a minimum contract price before growing season. When the advice for a 25- to 30-percent was announced, many, including him, decided to get out of the business until prices improve. Dell Cotton, executive director of the Virginia Peanut Growers Association, said the 24,000 acres planted in 2008 is expected to drop to 10,000 this year, and that estimate is "optimistic." (Read more)
Written by Aubrey Krekeler Posted at 6/19/2009 04:40:00 PM