Introducing a hybrid chestnut tree could repopulate American forests with the species while decreasing carbon-dioxide levels in the atmosphere, Terra Daily reports about a study by Purdue University. 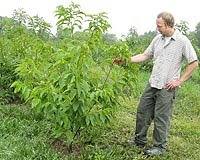 In the early 20th century, a fungus rapidly spread throughout the American chestnut range and nearly eliminated the species. But a few trees proved resistant to the blight, and crossing them with the smaller Chinese chestnut has produced a hybrid. "We're really quite close to having a blight-resistant hybrid that can be reintroduced into eastern forests," said Douglass Jacobs, an associate professor of forestry and natural resources at Purdue (university photo).

"Increasing the number of American chestnuts, which store more carbon, can help slow the release of carbon into the atmosphere," Jacobs explains. The trees' rapid growth and the wood’s use in furniture makes it retain carbon longer than other hardwoods. Harnessing that power to help manage global climate change could help revive the species. Jacobs told Terra Daily that trees absorb one-sixth of the carbon emitted globally each year. "Maintaining or increasing forest cover has been identified as an important way to slow climate change." But he cautions that other measures must be taken to slow carbon emissions. "We need to rely less on fossil fuels and develop alternate forms of energy." (Read more)
Written by Aubrey Krekeler Posted at 6/18/2009 11:14:00 AM