Only half of country-music fans have Internet at home, so are beyond much industry marketing

A recent survey for the Country Music Association found that only 50 percent of country music fans have Internet access at home – a fact that has left both executives and artists disheartened at the loss of marketing potential, The Washington Post reports.

Younger artists like Taylor Swift maintain a heavy online presence, from MySpace to Facebook, to an official domain through their respective record companies. Some groups, like Lady Antebellum, “owes its very existence to the Internet,” Melinda Newman writes. Even after the band was picked up by a production company, almost a third of their first album sales were digital. Older artists too, are being pushed by producers to expand their online use and fan base. 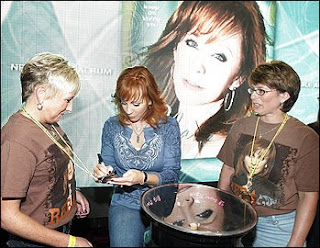 Reba McEntire (signing autographs in photo by Billy Kingsley of The Tennessean) now blogs and is on Twitter, and recently moved her bimonthly newsletter, which used to be mailed to more than 50,000 fans, onto her Web site.

Despite the love of the music, nearly 42 percent of fans were not interested in trying to obtain Internet access. One, Chuck Taulbee, lives in Stockton, Mo., where broadband is not available. As for his options, "It's dial-up, and it's just too expensive,” he says. The high costs of dial up, as well as concerns about online content, are why most fans remain uninterested, Newman reports. Of particular concern to CMA is that “countryphiles,” who are “more likely to be female than male, between the ages of 25 and 39, married, white and from small towns” drive almost half of all country music revenue, and they can’t be reached with Internet. (Read more)
Written by Aubrey Krekeler Posted at 6/16/2009 11:44:00 AM