UPDATE, April 8: "Democratic senators confirmed that the dozen-plus EPA limits that House Republicans attached to their 2011 spending plan would be replaced with mandates to study the economic impact of agency rules," Environment & Energy News reports. Senate Environment and Public Works Chairwoman Barbara Boxer, D-Calif., told reporters, "There is no rider on mountaintop mining removal. There is a study to look at the economic impacts of EPA regulation."

If the federal government shuts down tomorrow night for lack of spending authority, one cause may be disagreement over Republican efforts to rein in the Environmental Protection Agency's efforts to regulate mountaintop-removal coal mines, greenhouse gases and toxic air pollutants. 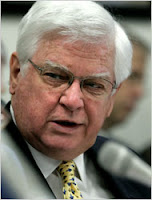 "House Appropriations Chairman Hal Rogers (R-Ky.) has said he is still defending all the H.R. 1 limitations on funding in his negotiations over keeping the federal government running through the end of fiscal 2011, and some Republicans have said they would not support a bill that did not place a moratorium on the EPA rules," Jean Chemnick reports for Environment & Energy News. Rogers represents almost all of the East Kentucky Coal Field.

House Republicans are "preparing to pass a bill later today that would keep the government open for one week while funding the Pentagon until fiscal 2012. Republicans consider that move a good-faith attempt to avoid a shutdown, but Democrats and the White House have ruled it out and called on Boehner's party to drop its focus on the policy riders in its continuing resolution." A spokesman for House Speaker John Boehner defended the policy push, saying "Americans are concerned not just about how much we're spending, but how we're spending it." (Read more, subscription required)
Written by Al Cross Posted at 4/07/2011 02:52:00 PM