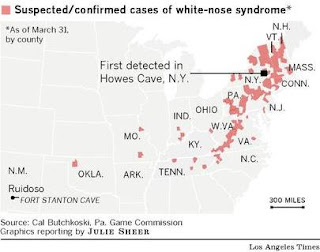 Since white-nose syndrome was first discovered in New York bats four years ago it has spread as far west as Oklahoma and killed an estimated 1 million bats. "A majority of the dead were little brown bats, which have lost an estimated 20 percent of their population in the northeastern United States over the last four years," Louis Sahagun of the Los Angeles Times reports. "The fungus seems to prefer the 25 species of hibernating bats, but each of the 45 species of bats in the United States and Canada may be susceptible to white-nose syndrome." A similar fungal growth has long been observed on bats in Europe.

"It is unbelievably sad and disheartening, and we can't seem to move fast enough to get ahead of it," said U.S. Geological Survey wildlife biologist LeAnn White. "We may be looking at phenomenal losses across the country with unknown ecological consequences." The loss of bats may have severe economic implications; a recent study published in Science estimated the value of pest control provided by bats was at least $3.7 billion nationwide, Sahagun writes.

With the disease continuing its westward march, Thomas Kunz and Jonathan Reichard of Boston University's Center for Ecology and Conservation Biology are urging the U.S. Fish and Wildlife Service to list the little brown bat as endangered. Solutions to curb the spread may bring about even worse complications. "Scientists have considered using fungicides, but studies have shown they could kill other microbes in caves," Sahagun writes. Placing heaters in the caves could raise the bats' body temperatures to a level that might prevent the growth of the fungus but would disrupt their hibernation.

"Killing infected animals would slow the spread of the disease but would not eliminate it because of the complexity of bat life," Sahagun writes. Tom Hallam of National Institute for Mathematical and Biological Synthesis at the University of Tennessee explained, "It would be all but impossible to find and kill every infected bat. Yet, because of the size of bat colonies and the many arenas in which they interact — reproduction, hibernation, swarming, mother and pup activities — it would only take one infected bat to start it all over again." (Read more) (Times video)
Written by Jon Hale Posted at 4/04/2011 09:42:00 AM