Our friends at the Daily Yonder got a nice write-up recently from the folks at Columbia Journalism Review, in The News Frontier Database. "The Daily Yonder began in 2007, primarily as a response to a nationwide reduction in news delivery for rural communities," Chris Benz wrote. "Daily Yonder contributors are often simply rural Americans willing to put pen to paper," and the Yonder allows rural newspapers to reprint its stories without charge. 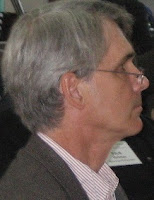 The Yonder and we are first cousins, meaning we have the same "grandparents," a cadre of people concerned about rural issues and how they are addressed in national, regional and local news media. The Rural Blog started in 2004 at the suggestion of Bill Bishop, left, a Kentucky native, Texas journalist and adviser to the freshly founded Institute for Rural Journalism and Community Issues. In 2007 Bill and his wife, Julie Ardery, started the Yonder for the Center for Rural Strategies.

The Yonder emphasizes original journalism and is aimed at a general audience, while The Rural Blog is an aggregator designed to bring story ideas, sources and approaches to rural journalists, and sometimes those stories come from the Yonder. We both deal in "analysis of national government news from a rural perspective," as Benz puts it, and we both steer clear of ideological agendas.

“We try to get local stories that tell a national story,” Bill told CJR. “Online journalism is fragmented and plays to its crowd. We wanted a place where people weren’t separated by ideology or geography.” (Read more)
Written by Al Cross Posted at 4/03/2011 04:55:00 PM