Kentucky governor visits communities of strip-mining foes who occupied his office in Feb. 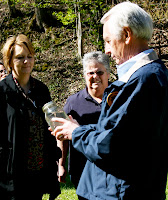 Responding to an invitation from strip-mining opponents who staged a sit-in at his office in February, Gov. Steve Beshear, right, visited residents of Floyd and Harlan counties in Eastern Kentucky this week. "Members of Kentuckians for the Commonwealth showed him streams and homes damaged by surface mining and asked him to take a stand against mine permits proposed for areas of Black Mountain around Lynch," Dori Hjalmarson of the Lexington Herald-Leader reports. The state Energy and Environment Cabinet has declared "frivolous" a petition to declare the "lands unsuitable for mining." (KFTC photo: Beshear examines contaminated municipal water)

Lynch City Councilman Taylor Hall said, "This town, if it dies, it can't be replaced, it can't be simulated, it can't be restored. ... If they are allowed to take these mountains, this town is gone, people's lives are gone, history is gone." KFTC member Doug Doerrfeld told Hjalmarson the meeting was a "positive first step," but he would have liked the Democratic governor to take a stronger stand for Lynch. ""I don't think he really gave clear answers," Doerrfeld said. Beshear said he would meet with locals again as the permits and petitions progressed. (Read more) For KFTC's detailed report on the governor's visits, click here.
Written by Jon Hale Posted at 4/08/2011 03:42:00 PM