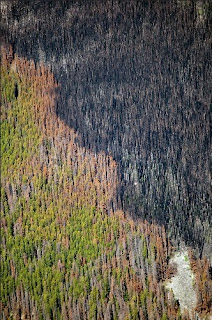 Some scientists now think massive forest die-offs as a result of climate change could effect the "future habitability of the earth" because people depend on forests to absorb carbon dioxide now more than ever whether they realize it or not. Justin Gillis of The New York Times reports that scientists have discovered that forests have been absorbing more than a quarter of the carbon-dioxide emissions from fossil fuels, an amount equal to the emissions from all the world's cars and trucks. If a large amount of forests die, scientists warn, trees could burn or decay and release stored carbon into the atmosphere, adding to the warming of the planet. (NYT photo: dying pine forest in Montana)

Scientists are trying several strategies to help save forests, Gillis reports. They've suggested that counties with more wealth should pay people in tropical areas to stop destruction of forests for agriculture and logging. Another plan is to thin out forests in the American West to prevent the spread of parasites and fires. Both ideas are stalling due to lack of funding. Tropical forest researcher Oliver Phillips told Gillis, “I think we have a situation where both the ‘forces of growth’ and the ‘forces of death’ are strengthening, and have been for some time. The latter are more eye-catching, but the former have in fact been more important so far.” To see an interactive map showing forest decline around the world, click here.

Even though many are predicting gloom and doom, Gillis reports that scientists also say the "point of no return" has not yet been reached and that many forests, like those in the Eastern U.S., are still sucking carbon dioxide from the atmosphere. Since CO2 is a major source of food for trees, some forests have seen an increase in growth, and a new study published in Science magazine says worldwide forests store a billion tons of carbon per year in wood. Scientists also acknowledge their predictions are crude; some predict the death of the Amazon forest, while others think forests will continue to be massive carbon-dioxide eaters through this century. (Read more)
Written by Ivy Brashear Posted at 10/04/2011 04:12:00 PM