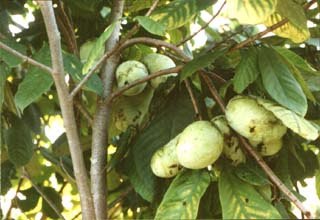 For decades people have tried to cultivate commercial pawpaws, but found it difficult because the fruit's season is short, its soft skin makes it hard to transport and it has a large seed pod. But now, a plant scientist who's worked 35 years to breed the perfect pawpaw has developed a way to make them bigger with more flesh, making them more attractive to buyers. (Blossom Nursery photo)

Neil Petersen tells National Public Radio's Allison Aubrey that after tasting his first pawpaw 35 years ago, he had a "revelation" that the wild fruit found mostly in the Eastern U.S. was just as good as a peach or apple and should be bred and commercialized in a similar way. Shortly after this experience, he began his life's dedication to the pawpaw, and now several orchards are growing his trees and selling his version of the fruit in farmer's markets.

Bringing even more attention to the pawpaw as a commercial fruit is Ohio University food scientist Rob Brannan. Aubrey reports that Brannan has studied the nutrients in pawpaws and published a study concluding the fruit is high in antioxidants, making it comparable to cranberries and cherries by this measure. He told Aubrey that putting a "health halo" over the pawpaw would give it a commercial boost. (Read more)