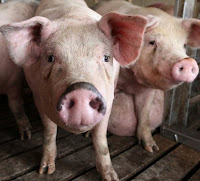 As farmers enjoy record-high prices for hogs, pig thefts are on the rise in Minnesota, Iowa, and nearby pork-producing states. The dismal economy, pig-farm isolation and difficultly in tracing pigs may be contributing factors to the rise in pig thefts, Monica Davey of The New York Times reports. (NYT photo by Allen Brisson-Smith)

In the past, farmers might have had one or two pigs go missing, "but now, it's different. This isn't about putting food on the table," Ryan Bode of Rebco Pork, who had 150 pigs taken, told Davey. Investigators suspect the pig thieves unloaded the pigs at meat-processing plants, affiliated "drop-off" facilities or sold them at auction, Davey reports. Marc Chadderdon, an investigator for the Nicollet County Sheriff's office, believes "someone in the business somewhere has the answer as to who's doing this."

Bode's family company, which raises 60,000 pigs per year in eight buildings, said only after intense investigation were they able to find how the pig thieves entered. "They definitely did their homework. And they definitely knew what they were doing," he told Davey. The rise in pig thefts has many farmers considering adding more security to the isolated barns, or tattooing their animals. (Read more)
Written by Deloris Foxworth Posted at 10/03/2011 03:44:00 PM