As price of gold rises, so does threat to streams 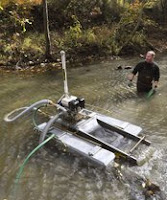 The rising price of gold has revived recreational gold prospecting, but many experts fear prospectors' technology may hurt aquatic life. Some use machines called suction dredges, right, which vacuum gravel, dirt and other particles from riverbeds and streams, resulting in aquatic life being "killed by the machine or smothered in stirred-up sediment," Bruce Henderson of the Charlotte Observer reports. (Observer photo by Robert Lahser)

North Carolina, the nation's top gold producer in the early 1800's, has no commercial gold mines and requires no permits for recreational prospecting, Henderson reports. However, the popularity of suction dredging has many concerned. The Uwharrie National Forest, home to about a dozen old mining sites, banned suction dredging about five years ago and prohibits metal detectors to prevent damage to rare plants or historic sites. LandTrust for Central North Carolina, a group that owns 1,300 acres along the Uwharrie River, fenced its property last year to keep out prospectors. Of more concern to environmentalists is three firms' exploration of historic mining sites in the Slate Belt region, Henderson reports. If they disturb less than one acre no permit is required.