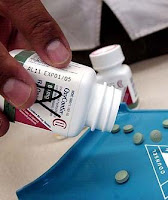 Eryn Brown of the Los Angeles Times reports that people living in rural areas are twice as likely as people living in cities to overdose on painkillers. In 2008, 20,044 out of 36,450 overdose deaths were caused by prescription drugs, mostly opioid pain relievers like oxycodone, methadone and hydrocodone. (Times photo by Lawrence Ho)

Brown reports that sales of the drugs increased with death rates. She writes: "In 2010, 4.8 percent of Americans 12 years or older used opioid pain relievers nonmedically - that is, without a prescription or purely for the feeling the drug causes. The report calculated that by 2010, 'enough opioid pain relievers were sold to medicate every American adult with a typical dose of 5 mg of hydrocodone every four hours one month.'"

The CDC recommended tracking prescription patterns, overdoses and limiting reimbursements to reduce inappropriate prescribing. It also cautioned that a balance between restricting access to prevent abuse and protecting legitimate use of the drugs must be maintained. (Read more)

UPDATE, Nov. 14: Some states track prescriptions of controlled substances by county, and the data can make for good stories and graphics, as the Lexington Herald-Leader showed with this story on Kentucky's prescription-pill epidemic.
Written by Ivy Brashear Posted at 11/03/2011 11:19:00 PM