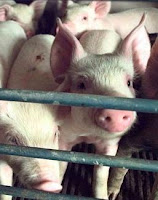 The U.S. Supreme Court will hear arguments next week over the proper treatment of "non-ambulatory pigs," or those that can't walk or stand on their own, at slaughterhouses in California after the National Meat Association sued the state government on behalf of the pork industry. The three-year-old law requires pigs that can't walk when they arrive at slaughterhouses to be removed, inspected and humanely euthanized if necessary. Federal law already mandates inspection of pigs that are lying down, but they don't have to be removed from the slaughterhouse.

David Savage of the Los Angeles Times reports that the meat lobby's lawyers say federal law supersedes state law and is more humane because it requires "inspections of sick animals rather than automatically killing them." The inspections, they say, are crucial in finding pig diseases like foot-and-mouth. Steven Wells, one of the lawyers, told Savage that pigs are sometimes stubborn, "stressed or fatigued" after the trip to the slaughterhouse, but they usually recover and are fine. California Deputy Attorney General Susan K. Smith sees it differently. She told Savage: "We're not concerned about a pig who is taking a nap." She said removing "non-ambulatory pigs" will protect the food supply and prevent animal cruelty.

Wells said "severe financial impact" would be incurred by the pork industry if it has to kill 200 to 300 pigs a day because "they were lying down." He and the other lawyers for the meat lobby are asking the Supreme Court to strike down the state law on the grounds that the federal law trumps it. A federal judge in Fresno agreed, and barred the state from enforcing the law. However, Chief Judge Alex Kozinski of the Ninth Circuit U.S. Court of Appeals sided with the state in a 3-0 decision. "Hogwash," he wrote, saying states have always had authority to determine which animals should be slaughtered and which should not. (Read more)
Written by Ivy Brashear Posted at 11/01/2011 10:52:00 AM