Editor of 1½-year-old, prize-winning weekly tells how and why 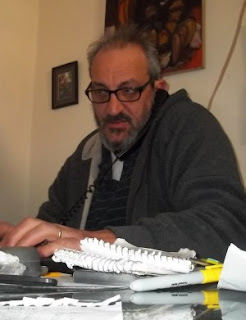 The Yancey County News, a weekly founded just last year, recently won two major journalism awards  -- the E.W. Scripps Award for Distinguished Service to the First Amendment and the Ancil Payne Award for Ethics in Journalism.  On the Burnsville, N.C., newspaper's masthead are only two people, Jonathan and Susan Austin. In a Q&A with The Awl, an online journal, reporter Dan Cooper asked Jonathan Austin, right, about the prestigious prizes, both awarded for stories reporting on corruption in the county’s official channels. In one series, the paper revealed that the county’s deputy-sheriff had pawned county-owned firearms for personal gain; another series uncovered absentee ballot fraud, voter coercion, and voter anonymity rights violations in the county.

Austin told Cooper that he came to Yancey County after working for 30 years for various media companies and after a family decision was made that he should come and live with his aging father and stepmother. He said he also had read the competition and knew there was a lot of room for some better news coverage in the county. As for the awards, he said he was just trying to write "about what was going on. In many ways, it's just what you learn in Journalism 101. It's not investigative aggressive; it's showing-up aggressive. It’s covering as many of the items of what goes on in a community in any given week. We're storytellers so when I’m talking to journalists, I try and remind them that we come up with scripts for the things we don’t necessarily want to tell our grandma and I remind them — who, what, when, where and why. That community I felt didn’t have anything aggressive enough.”

His guiding principles of community journalism: He relies on "almost 30 years of experience; that’s where the editorial process gets going, where the rubber hits the road. As Garrison Keillor would say, "that’s righteous time." I try and subscribe to the theory that everything is important to someone. I doubt that anyone not in school bothers to read the lunch page but I bet they understand the purpose for it being there."
Written by Amy Wilson Posted at 6/15/2012 11:21:00 AM