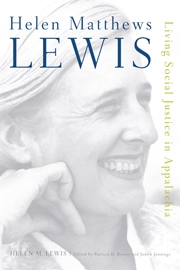 The Daily Yonder has excerpted historian and noted rural advocate Helen Lewis's Living Social Justice in Appalachia, just released by University Press of Kentucky. The book includes a smattering of her work -- scholarly, personal, a few essays, a few gardening tips, a recipe or two -- all to give you a flavor of her life in the hills she has loved and fought for. In this excerpt, she argues for rural community development that is only attainable if its economy is morally based.

"In this new phase of capitalist expansion, we find that Appalachia and rural America become like Third World economies and share their problems, high unemployment, lower wages, environmental degradation, community destruction, increasing poverty. Structural adjustment policies imposed on Third World countries took the form in this country of welfare reform, lowering wages and cutting social services in order to compete in the world economy. There has been a decline in democracy, growing distrust in and alienation from government and less participation in civic affairs. In the 1930s when the social contract of the New Deal was being formed, people looked to the government to provide some protection and security from the failures of the economic system. This is now questioned. Public schools and social security are in danger of being privatized. For some, the government is an enemy to be destroyed." (Read more)
Written by Amy Wilson Posted at 6/14/2012 10:02:00 PM