Moviemakers are making the switch from 35-mm film to digital, and are forcing all theaters to make the change within the next two years. It will save Hollywood movie producers about $2.5 million per movie, but it costs small, rural movie theaters sometimes hundreds of thousands of dollars to convert, a price most can't afford. Several towns have held fundraisers to save their downtown theaters, which would otherwise likely be forced to close.

Tom Cherveny of the West Central Tribune in Willmer, Minn., reports that a block party in downtown Madison, Minn., recently raised more than $20,000 from 650 people, almost half of the town's 1,500 residents, toward saving its two-screen Grand Theatre. The theater is now more than $75,000 closer to its $100,000 goal to buy digital conversion equipment. Maynard Meyer, owner of KLQP Radio in Madison and leasee of the Grand, told Cherveny he and office manager Kris Kuechenmeister are lucky to break even on the theatre operations, but that the theatre's importance lies in the quality of life it brings to Madison residents. 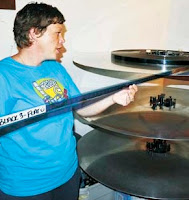 Other small theaters in rural America are dealing with similar financial issues, including the Capital Cinemas in Princeton, Ky. Owner Heidi Boyd, left, told the Princeton Times Leader's Stacey Menser that she needs to raise about $200,000 for the conversion. The town's residents are pitching in to help (link requires subscription). Theater owners in North and South Dakota said they are facing similar financial issues. UPDATE, 2/22/14: The Princeton theater's fund drive succeeded and it has gone digital.
Written by Ivy Brashear Posted at 6/12/2012 09:29:00 PM

The Grand Theatre in Madison, Minnesota completed the conversion to digital projection in July of 2013.