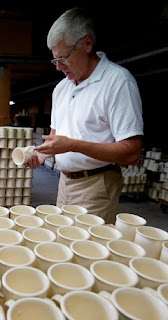 Corporate labor out-sourcing has hurt the economies of many rural towns across America, but the revitalization of one Ohio River town could become an example to other U.S.-based companies about the value of the rural American workforce.

East Liverpool, Ohio, was once the pottery capital of the U.S. when four dozen pottery factories were all at full operation, but when global competition became cheaper, the industry almost died, reports Stephanie Strom of The New York Times. The American Mug and Stein Company was near closing last year when Ulrich Honighausen, owner of tableware company Hausenware asked the Ohio company to make mugs for Starbucks. American Mug owner Clyde McClellan, right, agreed.

The pottery maker's mugs went on sale in Starbucks across the country this week as part of the corporation's new line of American-made merchandise branded Indivisible. The partnership has kept American Mug running, prevented four people from losing their jobs and created eight more positions. Money from the sale of the mugs, and other Indivisible products, will be put into Starbuck's "Create Jobs for USA Fund," which helps small businesses stay afloat. (Read more)
Written by Ivy Brashear Posted at 6/13/2012 01:21:00 PM