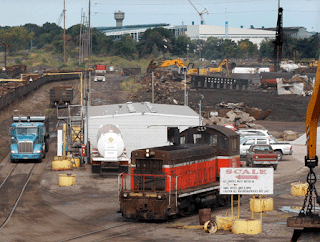 Advocates whose job it is to watch the natural-gas industry have been impressed by Ohio's example: The state has hired as many as 70 new field inspectors to keep track of the work being done by drillers of 250 more wells this year in their state alone. But, reports Jim Malewitz of Stateline, the news agency of the Pew Center on the States, there is concern that other states are falling way behind in their mandated inspections of the gas wells that have appeared on their landscapes. (Photo by Amy Sancetti)

Gwen Lachelt of Washington, D.C.-based Earthworks, which advocates more oversight of the gas industry, "notes that in other states with surging natural gas production, there has been no effort to beef up oversight of the oil and gas industry. 'No one is minding the store,' Lachelt says. 'The states are simply not enforcing what regulations they do have on the books…They don’t have enough inspectors, and wells are going uninspected."

Because of a lack of manpower, most wells across the U.S. are not inspected in a given year.  Malewitz notes that, for example, New Mexico has roughly the same number of oil and gas wells as Ohio, but it employs only 12 inspectors to oversee them. That small crew made between 25,000 and 30,000 inspections last year. In Colorado, home to 47,651 wells, a team of 15 performed 12,000 inspections in 2011, according to the state Oil and Gas Conservation Commission.  (Read more)
Written by Amy Wilson Posted at 6/20/2012 12:05:00 PM