Romney on 5-state bus tour to shore up rural votes 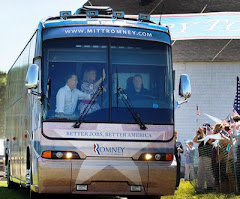 President Obama lost the nationwide rural vote, but the race for president is a state-by-state election, and rural voters could be critical in some swing states. Mitt Romney didn't do well among rural voters in the Republican primaries, so he is on a bus tour of five swing states, kicked off in New Hampshire and headed to Pennsylvania, Ohio, Wisconsin, Iowa and Michigan. The tour is "largely intended to generate enthusiasm among conservative voters who wouldn’t dream of backing Obama but might be lukewarm about the former Massachusetts governor," writes Scott Conroy of Real Clear Politics.

"Romney and President Obama are both, let's be honest, city slickers," reports Ari Shapiro of National Public Radio. "That's a big change for the American presidency, says Dee Davis, president of the Center for Rural Strategies," based in Whitesburg, Ky. "If it's Reagan on a horse or Clinton, the man from Hope, there's always been this kind of visual narrative or this story that to be president you had to be able to handle the wilderness, be comfortable outside of the city," Davis told Shapiro. "It's just part of the lore."

"One cameraman told ABC News that he was being paid by the Romney campaign to shoot an ad. No doubt that footage will resurface on a television screen near you sometime between now and November," Michael Falcone and Emily Friedman report for the network. 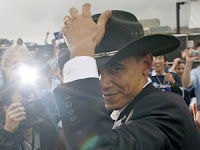 For his part, Obama (shown wearing a cowboy hat in Texas in Getty Images 2007 photo) is reminding rural voters of his efforts to help them. "The Rural Council, which Vilsack runs, is a group of Cabinet members who meet to talk about policies aimed specifically at rural America," Shapiro notes. "This week the council put out a report documenting improvements in the agricultural economy." (Read more or listen)
Written by Al Cross Posted at 6/17/2012 08:04:00 AM