Public higher education is failing when it comes to preparing students for the workforce, a new study by the Institute for a Competitive Workforce has found. It graded each state on how well its public colleges and universities prepare students. Sonali Kohli of The Ithaca Journal reports that the states with the worst grades trend rural: Alaska, Nevada, Idaho and Louisiana. 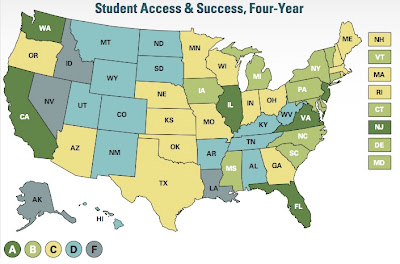 ICW President Margaret Spellings said colleges and universities are more worried about maintaining reputations than actually examining how they are performing. The report says states should "focus less on attracting new students and work harder at making sure students who are already enrolled get their degrees," Kohli reports. Spellings, a former secretary of education, said making it easier to transfer credits from community colleges to four-year schools and expanding online classes would help. Both are options that would be of particular importance in rural areas, where many attend community colleges and utilize online classes. (Read more)
Written by Ivy Brashear Posted at 6/21/2012 02:07:00 PM