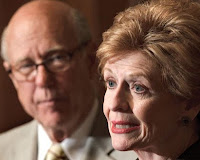 The Senate approved a wide-ranging, bipartisan-pleasing Farm Bill Thursday that would expand crop insurance, eliminate direct payments to farmers -- the backbone of farm subsidies since the mid-90s," notes David Rogers of Politico -- and make other cuts for a projected savings of more than $23 billion over its five-year lifespan. The bill passed on an unusual bipartisan vote of 64-35, after senators defeated most of the 73 amendments on a list agreed to by party leaders. The deal was brokered largely by Sens. Pat Roberts of Kansas and Debbie Stabenow of Michigan, top Republican and chairman of the Agriculture Committee, right (Associated Press photo).

One amendment that didn't make the list would have prevented meatpackers from owning livestock, reversing the trend in the industry. It was worth a vote, the Daily Yonder opines. Meanwhile, the House Appropriations Committee blocked "implementation of regulations meant to bring a little market fairness into the lives of poultry and hog producers," the Yonder says. "What a lively week for the nation's livestock raisers!"

"In the final hours Thursday, exhausted Democrats only narrowly beat back two anti-regulatory proposals — each of which got a solid majority but fell short of a 60-vote threshold," reports Rogers. "On a 56-43 vote, Sen. Mike Johanns (R-Neb.) came surprisingly close to winning a flat ban" on aerial surveillance of agricultural operations by the Environmental Protection Agency and Sen. Pat Toomey (R-Pa.) "came even closer, 58-41, on his proposal" to let rural water companies forgo mailing annual reports to customers if no violations had been found.

The new emphasis on crop insurance created "a real and lasting split" between corn and soybean farmers in the Midwest and "Southern rice, peanuts and wheat growers," Rogers notes, pointing to the roll call (which is available from the Yonder). Bridging that split will be high on the agenda in the House, where Agriculture Committee Chairman Frank Lucas (R-Okla.) "is open to keeping some target price supports" to help Southern farmers, "a heavier government hand than some tea party Republicans may want," Rogers writes. "At the same time, Lucas is shooting for greater savings than the Senate, meaning he will have to cut more from food stamps, straining his bipartisan coalition with farm state Democrats." The bill passed Thursday would cut about $4.5 billion from food stamps. The House Republican budget introduced earlier this year by Rep. Paul Ryan, R-Wis., would turn the nutrition program into block grants for the states.

The House is scheduled to start work on its own Farm Bill July 11, but before then it will consider an agriculture appropriations bill. "The fact that the Agriculture and Appropriations committees should be thrown together on the floor next week has its own irony," Rogers writes. "Both committees have a tradition of bipartisanship, which has earned them the scorn of many in the House Republican leadership. But that same history of working together is what the Senate was celebrating Thursday in Stabenow and Roberts’ performance." (Read more)
Written by Amy Wilson Posted at 6/22/2012 11:28:00 AM