Reporter who broke Penn State abuse story offers lessons, including: 'People can be good at lying' 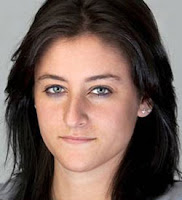 Harrisburg Patriot-News reporter Sara Ganim, 24, right, learned a big lesson while covering the Penn State sex-abuse scandal that has landed former assistant football coach Jerry Sandusky on trial this week. "People can be good at lying," she said during a speech at the annual convention of Investigative Reporters & Editors, reports Ted Gest of The Crime Report.

Ganim has won several awards for her coverage of the scandal, including a Pulitzer Prize this April. She told IRE members that she wasn't handed the story of Sandusky's wrong-doing and had to go after it with "old-school, knocking-on-doors journalism," Gest reports. It took her more than 18 months to compile the bits and pieces of reporting into a solid story that resulted in the allegations that Sandusky abused several boys over several years.

Ganim didn't name the sources who lied to her during that time, but said she had a two-hour conversation with someone that was initially convincing. Later, she found out the information was "fabricated" and made her think "This does not add up," Gest writes. An original source told her that the source's tip wasn't true, but she followed it anyway.

She said The Associated Press got ahead of her at one point, but by returning to her original sources, including mothers of some alleged victims, she was able to stay ahead of her competition. Ganim had recently been hired by the Patriot-News as a police reporter, but her boss was willing to let her work on the Sandusky story full-time. As a bit of advice to those at the conference, she said they should find employers who support good investigative reporting, because many wouldn't have that much faith in a new reporter. (Read more)
Written by Ivy Brashear Posted at 6/19/2012 04:22:00 PM