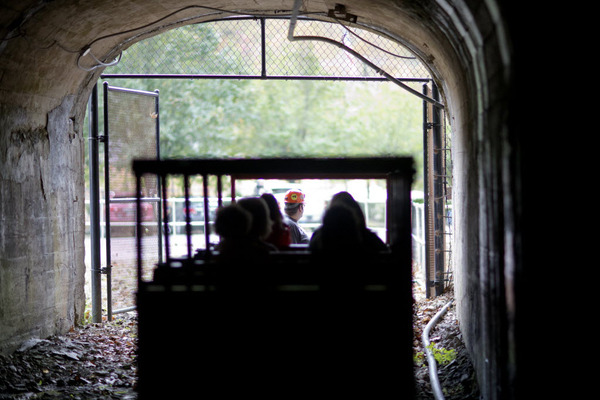 Struggling Central Appalachian communities that once relied on the coal industry for jobs are now trying to revitalize local economies through tourism that highlights the region's rich coal history, Jonathan Drew and Allen Breed report for The Associated Press. That includes mining museums, festivals, wilderness adventures, coal-themed business or sub-regions that "have been rechristened with alluring names like the Hatfield-McCoy Mountains or the PA Wilds." (AP photo by David Goldman: A coal mine tour in Lynch, Ky.)

"Will it work? Proponents point to the region's assets, its natural beauty, its distinctive mountain character—and characters (like the feuding Hatfields and McCoys)," Drew and Breed write. "But others note the paradoxes: Environmental degradation alongside unspoiled areas, a history of poor education that for decades didn't preclude high-paying jobs, an away-from-it-all feel partly caused by a lack of good roads and other infrastructure."

Recent studies suggest that except for a few lucky areas, the trend won't work, Drew and Freed write. Suzanne Gallaway, an adjunct professor at the University of North Carolina-Greensboro, told AP, "It's kind of really odd that economic practitioners push tourism to be a propulsive industry when it has such low wages.

Statistics back up those claims, Drew and Breed write. A 2012 report compiled for the Mountain State's Division of Tourism found that West Virginia's "spending and hospitality employment have been slow to grow in many counties." The report found that jobs in the Hatfield-McCoy Mountains dropped from 2004 to 2012 from 1,400 to 1,300, and "another area that includes the New River Gorge and the Greenbrier resort shed 700 tourism-related jobs during the period, the report shows."

But those numbers aren't stopping states from continuing to try to turn coal's history and culture into profits, Drew and Freed write. Business owners are trying just about everything to attract tourists, including an Eastern Kentucky couple that turned an old "company store" into a winery that sells products named after the region's coal history.

Tourism consultant Carole Morris told AP, "It's not a panacea. It's not going to be that cure-all." But she did add, "I have rarely been in a place where tourism was impossible. There's always something interesting, something in the history of a community that brings people." (Read more)
Written by Tim Mandell Posted at 3/30/2015 01:32:00 PM