Coal prices have dropped 33 percent over the past four years, making operations unprofitable for about 72 percent of Central Appalachian coal mines in Kentucky, West Virginia and Virginia, Mario Parker reports for Bloomberg. "To make matters worse, there’s little chance of a quick rebound in prices. That’s because idling a mine to cut output and stem losses isn’t an option for many companies. The cost of doing so—even on a temporary basis—has become so prohibitive that it can put a miner out of business fast, industry analysts say."

"So companies keep pulling coal out of the ground, opting to take a small, steady loss rather than one big writedown, in the hope that prices will bounce back," a decision that is only adding to the supply gut and driving prices down, Parker writes. For instance, coal companies this year will dig up 17 million more tons of coal than power plants need. The oversupply is made worse by a decrease in exports, with overseas companies being able to get coal cheaper elsewhere. 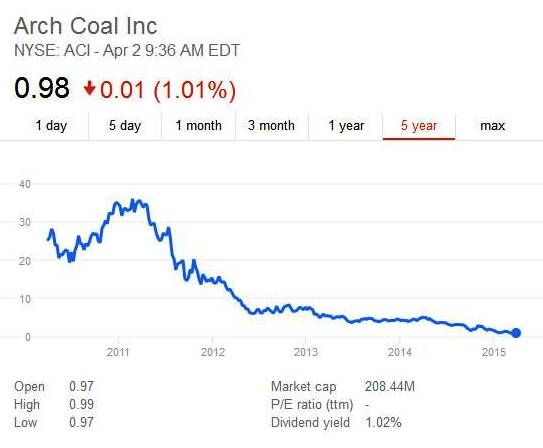 "Central Appalachia coal has fallen four straight years on the New York Mercantile Exchange. Even after a rally in February, prices are the lowest for this time of year since 2009. Meanwhile, gas is at the second-lowest seasonal level in the past decade," Parker writes. (Arch Coal prices from 2011-2015)

"It’s partly the result of a 1977 law that requires companies to reclaim closed mine sites," Parker writes. "That includes restoring grasslands, removing waste water and sealing the mine shafts. So while a 4 million-ton-a-year mine in Central Appalachia, which has the nation’s highest coal costs, may lose $15 on every ton, the one-time expense to permanently close it could reach as much as $44 million, according to Wood Mackenzie."

Coal companies like Arch Coal and Alpha Natural Resources have been closing up shop in Central Appalachia, Parker writes. Alpha, the second-biggest U.S. coal producer by sales, "told investors Feb. 26 that it had $640.5 million in liabilities associated with closing the mines. That’s almost three times as much as the company is worth." Arch Coal, which hasn’t made a profit since 2011, set its figure at  $418 million as of Dec. 31. (Read more)
Written by Tim Mandell Posted at 4/02/2015 04:49:00 PM