The federal government, an environmental group and the world's largest gold mining company reached a deal on Thursday to protect sage grouse across more than 900 square miles of private land in Nevada, Scott Sonner reports for The Associated Press. 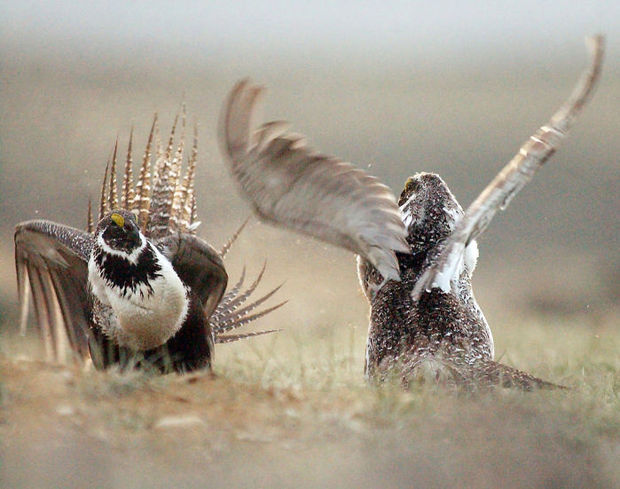 Barrick Gold Corp., The Nature Conservancy, the U.S. Bureau of Land Management and U.S. Fish and Wildlife Service will establish "a 'conservation bank,' providing the mining firm credit for enhancing critical habitat in exchange for flexibility in future operations," Sonner writes. "It aims to preserve and restore more habitat than is lost through development while at the same time providing Barrick with more certainty as it maps out new mining plans." (AP photo)

Also last week, eight eastern and central Oregon counties signed a deal with the federal government that "allows landowners to enroll their property in a voluntary conservation program," Shelby Sebens reports for Reuters. "Officials say the deal, along with other conservation agreements across Oregon, could protect over 4 million acres (1.6 million hectares) of sage grouse habitat."

"The Oregon deal means landowners can volunteer to take steps to protect the sage grouse now, such as removing invasive grasses and marking barbed wire fences, in return for assurance that they won't have to follow additional regulations, officials said," Sebens writes.

Fish and Wildlife, which has said it wants to protect 16.5 million acres of high-value sage grouse habitat in order to save the bird from the threat of extinction, will decide in September if the species should be listed as endangered. BLM's land-use plan amendments, set to be finalized in late summer, will be a key factor in that decision.
Written by Tim Mandell Posted at 3/30/2015 01:28:00 PM