Soft drinks are by far the No. 1 item purchased by households with food stamps, USDA finds

Households that use the federal Supplemental Nutrition Assistance Program, or SNAP – formerly known as food stamps – are a fifth more likely to have more sweetened beverages in their homes than households not in SNAP. A study by the U.S. Department of Agriculture revealed that the top items bought with food stamps are soft drinks, which are high in sugar and have been blamed for increasing childhood obesity, which is more prevalent among rural children.

This is the first Agriculture Department study to reveal "purchasing habits under the program in detail," Jen Fifield reports for Stateline. "The report, along with the election of President Donald Trump, who may be more inclined to tighten welfare rules, has reignited a long-standing debate on whether the government should allow people to use food stamps to buy unhealthy food."

The study found no huge differences between households with or without SNAP when it came to purchasing most food products like fluid milk, ground beef and bagged snacks. But "expenditure proportions on soft drinks were slightly higher for SNAP households compared to non-SNAP households," making it the No. 1 purchase for SNAP holders. Soft-drink packages of 12 to 18 cans ranked $164.6 million, followed by 2-liter bottles ($70.9 million), and 20-24 pack cans ($39.7 million). Those categories plus two others for soft drinks added up to 38.6 percent of SNAP expenditures; in non-SNAP households, the soft-drink total was 31.7 percent. 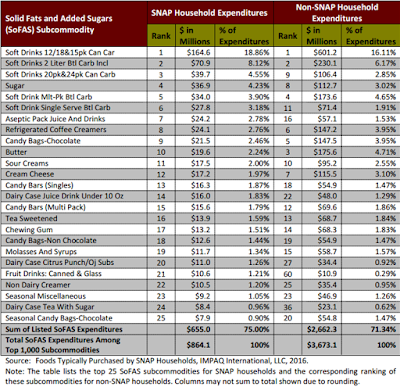 The study report said the data came from "a leading grocery retailer" during the 2011 fiscal year. The study analyzed the spending habits of about 3 million SNAP households; the report notes that purchases made at other SNAP-authorized stores were not included.

Studies have suggested that the consumption of sugar-sweetened beverages lead not only to tooth decay and weight gain, but also to type 2 diabetes, elevated cholesterol and nonalcoholic fatty liver disease in children. Nutrition educators want to ban the purchase of junk food through the SNAP program, but advocates such as the Food Research and Action Center say banning certain products from SNAP would be too complicated and costly, Fifeild writes. "FRAC and similar groups that fight to end hunger, along with organizations representing merchants, are fervently opposed to restrictions, saying that along with being burdensome to implement, they are also unlikely to change eating habits."
Written by Traci Thomas Posted at 2/28/2017 12:46:00 PM

SNAP recipients make the same purchasing decisions as any other consumer when choosing what groceries to provide for their families and should not be controlled by government restrictions. Limiting SNAP purchases means costly, expanded government bureaucracy. Restricting what certain Americans can eat will not improve public health or reduce obesity. According to USDA, ‘’incentives – rather than restrictions – that encourage purchases of certain foods or expanded nutrition education to enable participants to make healthy choices are more practical options and likely to be more effective in achieving the dietary improvements that promote good health.”


What goes in a person’s grocery cart is their choice—individuals are perfectly capable of choosing what’s best for their family. Politicians should focus on what matters most – education, safety and jobs – and leave the grocery shopping to consumers.