Do people in your neck of the woods believe climate change is happening? The Yale Climate Opinion Maps, created by Yale University's Yale Program on Climate Change Communication and George Mason University's Center for Climate Change Communication, include county-level data (updated this week) on the percentage of people who believe climate change is occurring.

Seventeen survey questions were asked, such as: Do you think that global warming is happening?; How much do you trust or distrust climate scientists as a source of information about global warming?; and a question that asks if participants think global warming is caused by human activities, natural changes to the environment, other causes, or if they believe global warming is not happening. (Yale map: Screenshot of how many people in Logan County, West Virginia believe climate change is happening. For the interactive map click here) 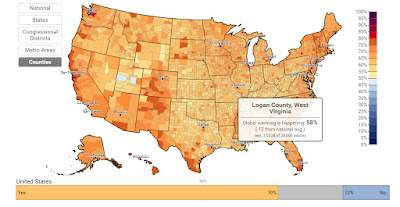 "Across the country, 70 percent of Americans think global warming is happening and that it will harm future generations," Erika Bolstad reports for Climatewire. "An estimated 82 percent of adults think there should be support for research into renewable sources of energy. An estimated 69 percent think there should be strict limits on CO2 emissions from coal-fired power plants."

Data also includes "information from other survey questions, including how much people trust climate scientists, whether they think global warming will harm plants and animals, and how often people discuss global warming with their friends and family," Bolstad writes. "It even asks how often they hear about global warming in the media."

The data include the number of people surveyed in each county, from which a margin of error can be calculated: Divide 0.25 by the sample size, take the square root, then multiply the root by 1.96 (for a confidence level of 95 percent, meaning that 19 of 20 times the result of the poll would be the same, within the error margin, of a survey of the county's entire population).
Written by Tim Mandell Posted at 3/01/2017 12:22:00 PM