Hundreds of bee species in North America are declining says a study by the Center for Biological Diversity. The study, which said sufficient data exists for 1,437 native bee species—out of more than 4,000—in North America, found that 749 are declining. Researchers also found that 347 native bee species are "imperiled and at increasing risk of extinction." Study author Kelsey Kopec said "declines are caused primarily by habitat loss, heavy pesticide use, climate change and urbanization." (Center for Biological Diversity graphic) 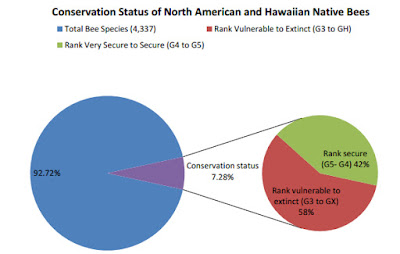 "Experts from the center reviewed the status of 316 bee species and then conducted reviews of all available information to determine the status of a further 1,121 species," Gina Cherelus reports for Reuters. "The center said the species which lacked sufficient data were also presumed to be at risk of extinction Gina Cherelus reports for Reuters. Among the native species that are severely threatened are the Gulf Coast solitary bee, the macropis cuckoo bee and the sunflower leafcutting bee, which is now rarely seen."