For a century or so, consolidation in rural areas has meant the merger of banks and schools. Now, in some places, it means the merger of newspapers.

Three weeklies in the two counties at Kentucky's southwestern tip are becoming one. The Hickman Courier and The Fulton Leader in Fulton County, and The Hickman County Gazette in Clinton, published their last editions this week. Next week subscribers will receive The Current, a name that reflects their locations along the Mississippi River. They have the same owner, Magic Valley Publishing of Camden, Tenn. "This regional newspaper hopes to unify the area to aid efforts as civic leaders work to develop and grow commerce and improve community lifestyles," Publisher Dennis Richardson said.

The two counties are heavily agricultural, and have been losing population for decades; the 2010 population was 6,813 in Fulton County and 4,902 in Hickman County. But as recently as 1989, the Fulton paper was a daily. The Current will operate from the Leader's old office and will continue to cover eastern Obion County, Tennessee. Fulton is on the state line and is home to the annual Banana Festival, named for the city's distinction in the 1880s of having the only ice house for new refrigerated railcars carrying bananas north.

UPDATE, Aug. 19: Paxton Media Group, based in Paducah, Ky., has created a joint website, KentuckyBarkleyNews.com, for its three weeklies on and near Lake Barkley in Western Kentucky, the Herald-Ledger of Eddyville, The Cadiz Record and The Tribune-Courier of Benton, seat of Marshall County, which is on Kentucky Lake.

In northern South Dakota, the Isabel Dakotan and the Timber Lake Topic merged at the start of 2016, and "agree it was a good move," Brian Hunhoff reports in the latest newsletter of the International Society of Weekly Newspaper Editors. The merged paper, circulation 1,600, uses the Topic's nameplate with the line, "continuing the Isabel Dakotan," in the designs familiar to readers.

The towns are about 20 miles apart. The papers began working together in 2013, when Topic co-publisher Jim Nelson became ill and Dakotan owner Robert Slocum helped Kathy Nelson keep the paper going. "When Jim passed away in October of that year, we were already a team," Nelson told Hunhoff. Slocum, asked the most challenging part of the merger, said "It's hard to tell people you are improving the product when it means one more empty building on Main Street." He works out of his home.

"The evolution of the Topic and Dakotan may become a model for small, rural papers struggling to survive," Hunhoff writes, quoting Dave Bordewyk, executive director of the South Dakota Newspaper Association: "I do think it's possible this type of merger would work elsewhere." 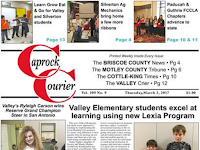 It has in the Texas Panhandle since 2013, where The Caprock Courier absorbed four very small weeklies in three counties: the Briscoe County News, the Motley County Tribune, The Cottle-King Times and The Valley Crier. Each printed edition has a few pages headed with each paper's nameplate. To read the online or printed edition, click here.
Written by Al Cross Posted at 3/04/2017 11:58:00 PM