More methane is emitted from natural gas-fired power plants and oil refineries than previously thought, says a study by researchers at Purdue University and the Environmental Defense Fund published in the journal Environmental Science & Technology. Methane is a much more powerful greenhouse gas than carbon dioxide, but breaks down in the atmosphere much more quickly. (Purdue University graphic) 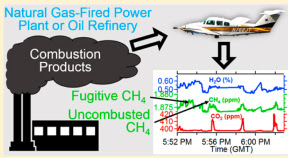 Paul Shepson, director of Purdue's Climate Change Research Center, said "EPA's greenhouse gas reporting program focuses on how much escapes from belching power stacks, without considering that methane could be leaking from compressors, valves and industrial hardware," Hess writes. He told Hess, "The good news from our study is that while emissions are greater than anticipated, natural gas-burning power plants are still cleaner, relative to burning coal."

Shepson said "The amount of methane escaping from the plants in the pilot study, combined with previous estimates of methane leakage in the supply chain, is still below the 'breaking point at which it would cancel out the positive climate impacts of switching from coal to natural gas," Hess writes.
Written by Tim Mandell Posted at 3/15/2017 08:19:00 AM