Two West Virginia counties are suing drug distributors for contributing to the state's opioid epidemic and five more counties are expected to file lawsuits this week, Scott Higham and Lenny Bernstein report for The Washington Post. According to the federal Centers for Disease Control and Prevention, West Virginia had the nation's highest age-adjusted death rate for drug overdoses in 2014 and 2015, the last years for which rate have been computed.

The lawsuits against McKesson Corp., Cardinal Health and AmerisourceBergen—which distribute 85 percent of the nation’s drugs—and Walgreens, CVS and other stores, "are among the first of their kind in the country," reports the Post. "They accuse the companies of creating a hazard to public health and safety by shipping inordinate quantities of opioids into the state in violation of a West Virginia law. The law was originally designed to permit the demolition of run-down buildings that posed a public nuisance and threatened the safety of a community."

The lawsuit says, “The unlawful conduct by the defendant wholesale distributors is purposeful and intentional,” reports the Post. Attorney Paul Farrell Jr., who filed the lawsuits, told the Post, "The purpose of these lawsuits is to make the economic cost of willfully violating the law so significant that we force the wholesalers to abide by the law."

AmerisourceBergen said in a statement that the company “has been and remains committed to the safe and appropriate delivery of controlled substances," reports the Post. (Post graphic: Age-adjusted overdose rate 1999-2015) 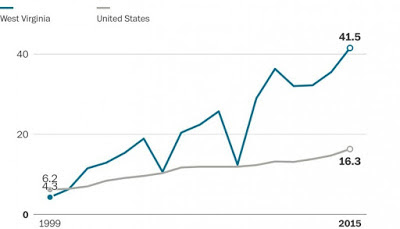