The Congressional Budget Office predicted Monday "that 24 million fewer people would have coverage a decade from now than if the Affordable Care Act remains intact, nearly doubling the share of Americans who are uninsured from 10 percent to 19 percent," Amy Goldstein, Elise Viebeck, Kelsey Snell and Mike DeBonis report for The Washington Post.

The impact would be greater in rural areas, The Wall Street Journal reports. To see a Democratic-compiled rundown of how CBO thinks the bill would affect each of the 435 congressional districts, click here.

"The report predicted that premiums would be 15 percent to 20 percent higher in the first year compared with those under the Affordable Care Act but 10 percent lower on average after 2026," reports the Post. "By and large, older Americans would pay 'substantially' more and younger Americans less. But the GOP legislation, which has been speeding through House committees since it was introduced a week ago, would lower the deficit by $337 billion during that time, primarily by lessening spending on Medicaid and government aid for people buying health plans on their own." (Post graphic: The fall and projected rise in the uninsured ranks) 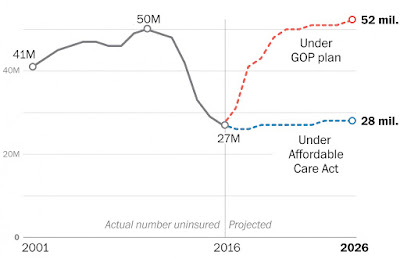 Losses would be particularly bad in rural areas, Anna Wilde Mathews and Dante Chinni report for The Wall Street Journal. Nationwide, "a rural 45-year-old making around $18,000 a year would pay about $2,291 a year more on average from his own wallet under the Republican bill than under the ACA, according to the analysis—compared with a $1,588 increase for a 45-year-old urban resident. For 62-year-olds earning about $18,000, the average increases in cost under the Republican bill's setup were far greater: $9,075 for rural and $6,954 for urban consumers."

"In extreme cases, the amount a consumer might owe for a plan could exceed that person's annual income," the Journal reports. "In Nebraska's Chase County, a 62-year-old currently earning about $18,000 a year could pay nearly $20,000 annually to get health-insurance coverage under the House GOP plan—compared with about $760 a year that person would owe toward premiums under the ACA," according to an analysis from consulting firm Oliver Wyman.

"The Oliver Wyman analysis highlights how rural areas, where individual insurance premiums are often higher, could see a major effect from the shift to flat-sum tax credits," reports the Journal. "Compounding that, rural populations are often older and poorer, so the proportion of those doing worse under the new subsidy setup may be higher. Of the 100 counties where 62-year-olds earning around $36,000 would see the biggest jump in annual costs, 97 were rural."

"People with higher incomes could see their costs go down under the Republican proposal," reports the Journal. "For instance, a rural 62-year-old making about $54,000 would spend about $2,588 less per year for a plan on average under the Republican bill's subsidy structure, which gives tax credits to people at higher income levels than the ACA does. The urban 62-year-old at that income level would spend $2,856 less."

Gary Claxton, a vice president at the Kaiser Family Foundation, told Guo, "It is simply cheaper and easier to provide health care in places with a lot of people. In urban areas, it’s all about being able to negotiate efficient, lower-cost networks. That’s why there’s much more ability to get lower-cost premiums in those areas. In a rural area there’s not really much you can do by negotiating with the few existing providers that are there.” 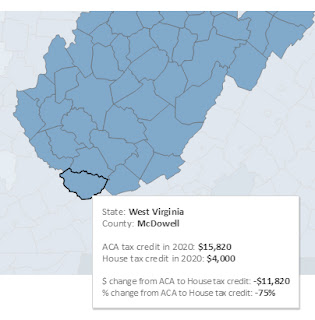 Public Tableau has created an interactive county-level map of tax credits under Obamacare vs. the new health care plan in 2020. This screenshot shows how the tax credit in McDowell County, West Virginia, one of the nation's poorest counties, would be about one-fourth of what it is now. Trump won 74 percent of the vote in McDowell County.
Written by Tim Mandell Posted at 3/14/2017 12:22:00 PM