No rhyme, reason to variances in rural health cost

A recent study from Dartmouth College shows health care costs vary widely across the rural United States. Researchers at the Dartmouth Medical School took a sample of Medicare costs from every hospital, Bill Bishop and Julie Ardery of the Daily Yonder report, and adjusted the fugures for differences in race, sex and age from place to place, but not income. 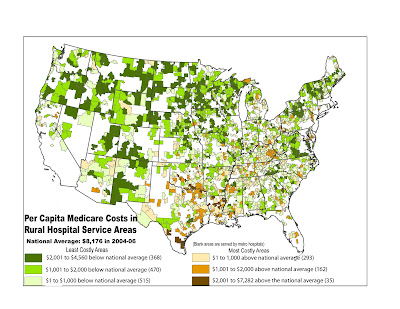 “This map illustrates that variation in health-care spending is not just about big city versus rural areas,” Dartmouth economist Jonathan Skinner told the Yonder. Researchers wrote in the recent issue of the New England Journal of Medicine, “Regional differences in poverty and income explain almost none of the variation.” Skinner says 70 percent of the variation is accounted for by discretionary decisions by physicians. "Doctors in some areas order more tests, hospitalize more patients and consult more specialists than do doctors in other places," Bishop and Ardery write.

"Rural areas generally spend less than the national average on Medicare than do urban areas," the couple report. "Only 27 percent of rural hospital service areas had per capita Medicare costs above the national average from 2004-2006." Skinner told the Yonder one reason for the cost differences among rural areas may be poorer health in more expensive areas, but Bishop and Ardery found that some hospitals in southeastern Kentucky and West Virginia, in traditionally poor health areas, cost less than many other rural hospitals.

What the map ultimately shows, they write. is that the government is spending "vastly more on health care in some areas than in others without any indication that the increased spending results in better health." (Read more)
Written by Jon Hale Posted at 10/23/2009 10:51:00 AM