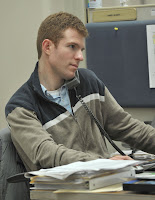 Daniel Gilbert, left, of the Bristol Herald Courier, circulation 33,000, has won another national award for his investigation of the mess Virginia and its natural-gas companies have made of a law and program to develop the state's coalbed methane and pay royalties to those who have a claim on it. Last month he won the first community-journalism prize in the National Journalism Awards; today he won the category for newspapers under 100,000 circulation in the Investigative Reporters and Editors contest.

"Gilbert tackled a subject that many would find incomprehensible," the judges wrote. "Using extensive open records requests and building his own database, Gilbert not only found a state escrow fund of $25 million that could not be accessed to pay land owners but also gas and oil companies that never paid into the fund. He found reporting errors and redundancies that showed the fund was losing money and he brought it all home with engaging interviews with shortchanged land owners. The series led to the first audit of the decade-old escrow fund, more attention by the department that runs it and $700,000 in back payments by oil and gas companies and pending state legislation to make it easier for people to get paid." For more on the series, click here. For the latest story, here.

The award certificate for local-circulation weekly newspapers went to the Lake Oswego Review, in a suburb of Portland, Ore., for a series of stories revealing that the local police lieutenant had been "forced to leave a job 17 years earlier after he sexually assaulted a woman while on duty; was arrested on charges of assaulting his wife and driving drunk; and that powerful friends saved his career," the judges said.

Finalists in the small-daily circulation category won by Gilbert were Eric Eyre of The Charleston Gazette for revealing how a state official funneled grant money to her son and tried to cover it up; Duaa Eldeib of the Daily Southtown of Chicago for exposing what IRE called "irresponsible and corrupt" spending by a regional school superintendent; and The News-Democrat of Belleville, Ill., for reporting on a state prison; and Melissa Nann Burke of the York (Pa.) Dispatch for her investigation of a local charity that paid a family $2.5 million to run it. The York Daily Record was a finalist for the IRE Freedom of Information Award for its creation on an open-records Web site and related investigations, including one of the same charity.

Some other IRE awards went to journalism with strong rural implications. The highest award, the IRE Medal, went to The New York Times for its "Toxic Waters" series and KHOU-TV's stories on discrimination and corruption in the Texas National Guard.
Written by Al Cross Posted at 3/29/2010 01:09:00 PM