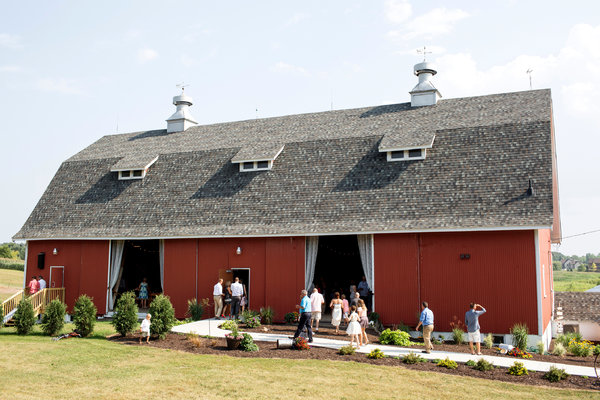 Rural weddings in barns are the latest fad for stylish urbanites. While landowners say the weddings are a great way to earn extra money and provide a memorable service, neighbors complain about the noise, fear for the safety of guests and question if the events are in violation of local zoning laws, Julie Bosman reports for The New York Times. (NYT photo by Jenn Ackerman: A barn wedding in Grant, Minn.)

"Grooms and brides say the barns are part of a cultural shift away from traditional weddings," Bosman writes. "At a typical barn wedding, formal china and glassware are out, in favor of carefully mismatched plates and Mason jars for sipping cocktails. Guests nibble casual fare like grilled corn on the cob and barbecued pork. If the weather cooperates, the evening often ends with people gathering around a bonfire and toasting s’mores under the stars."

"Barn owners say they are responding to a demand in the market," Bosman writes. Scott Jordan, who owns 50 acres in Grant, a quiet hamlet outside St. Paul, said he spent more than $300,000 to restore a barn on his property so that he could rent it out for weddings, charging $4,800 per event.

But residents "have protested that some barn owners flout zoning rules requiring that they operate only as agricultural enterprises," Bosman writes. "Unlike other businesses, the barns are often not inspected to ensure that they are up to code, and many lack proper sanitation, fire doors and sprinklers, accommodations for people with disabilities and licenses to serve liquor." Laurie Tulchin, who lives in a rural part of Iowa City next door to a wedding barn, told Bosman, “They blare music all night long, they have college students out there screaming and everyone’s drinking. Rural residents have quiet lifestyles. Sometimes I just think, ‘What the heck happened out here?’”

Ongoing disputes between neighbors have ended up going before local officials. "City council meetings have become stages for disputes in areas where friendly relations are the norm. Some small townships with ambiguous zoning laws have been forced to examine their regulations to figure out whether the wedding barns are legal," Bosman writes. "In some towns, judges have intervened, leaving trails of anguished soon-to-be-married couples. Last summer, a judge in St. Louis County, Mo., ruled that a historic barn on a property with a view of the Mississippi and Missouri Rivers was a potential fire hazard, leaving a bride and groom who had scheduled a wedding reception there only days to make other plans."

Neighbors also say they fear for the safety of guests, Bosman writes. Jeff Hettmann, whose next-door neighbor operates a wedding barn in Glenmore, Wis., outside Green Bay, told Bosman, “All these people want to have this rustic outdoor wedding in the country so they can get closer to nature, but that barn was built for storing hay. It’s not designed to have 200 people jumping up and down and dancing in it.”


But barn owners "say their businesses should be considered a form of agritourism, a use of farmland not unlike petting zoos, hayrides and other ventures that have become popular in an era when family farming is difficult to sustain," Bosman writes. "Some towns are scrambling to change zoning laws to allow more landowners to cash in. The planning commission in Hinesburg, Vt., voted to change its zoning—which allowed mainly farming and forestry—to a more generous definition including weddings, day camps and cafes."

And the rural wedding boom doesn't appear to be waning, Bosman writes. "Last year, there were 44 wedding barns in Wisconsin, and about eight more are expected to open this year, said Steve Peterson, the president of the Wisconsin Agricultural Tourism Association." (Read more)
Written by Tim Mandell Posted at 8/05/2014 04:44:00 PM