While rural residents, as a whole, paid slightly higher monthly rates in 2014 for healthcare under federal health reform, residents in some states with largely rural populations and fewer insurance choices are paying significantly higher rates than residents in more urban areas, says a study by the Leonard Davis Institute of Health Economics at the University of Pennsylvania. (Penn LDI map) 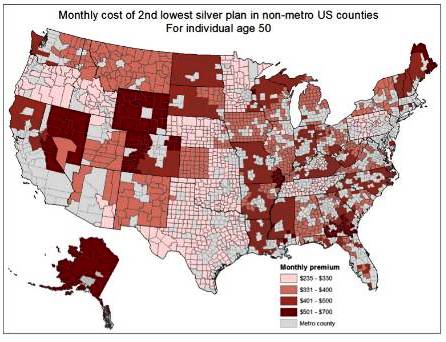 "The average monthly premium for the second-cheapest silver plan, which is designed to cover 70 percent of medical costs, was $387 in rural counties, compared to $369 for urban counties," Paul Demko reports for Modern Healthcare. "But those in states with a large percentage of rural residents, regardless of where they lived, saw significantly higher premiums this year. For states with less than 5 percent of residents living in rural counties, the average premium was $402. But for states where more than half of the population lived in rural counties, the average monthly premium was $452."

Urban residents also had more choices, Demko writes. "On average, they could select from 17 different plans offered by five different carriers. For rural residents, there were roughly 14 plan options available from four insurers. Rural residents also were less likely to have narrow-network options, which are often cheaper than plans with broad provider networks. Just 18 percent of rural counties offered such plans, compared to 38 percent of urban counties." (Read more)
Written by Tim Mandell Posted at 8/07/2014 02:10:00 PM