A dramatic rise in earthquakes since 2001 in southern Colorado and northern New Mexico can be linked to deep injection of wastewater underground, says a study by the the U.S. Geological Survey to be published in the Bulletin of the Seismological Society of America. 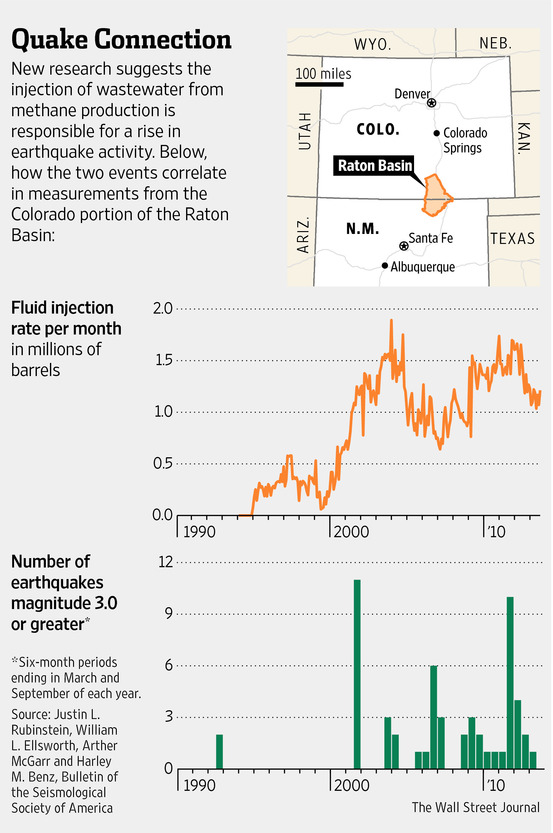 The study said that the Raton Basin, which straddles New Mexico and Colorado, had one earthquake of 3.8 magnitude or higher from 1972 to 2001, but since the area has seen an increase in drilling, the area had 16 earthquakes from 2001 to 2013, Tamara Audi reports for The Wall Street Journal. "A magnitude 5.3 quake in August 2011 occurred near two injection wells. The wells were just a few miles from the site of the quake and were injecting 'more than 400,000 barrels of wastewater per month' in the 16 months before the quake, the study said." (WSJ graphic)

Researchers said that since mid-2000 the total injection rate of the 21 high-volume wastewater disposal wells in Colorado and seven in New Mexico, have ranged from 1.5 to 3.6 million barrels per month," Daniel Wallis reports for Reuters. "They said the timing and location of seismic events correspond to the documented pattern of injected wastewater and that their findings suggest seismic events are initiated shortly after an increase in injection rates." (Read more)
Written by Tim Mandell Posted at 9/17/2014 01:02:00 PM