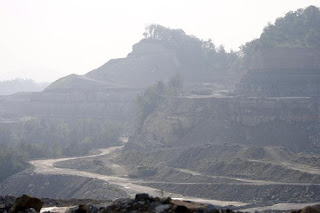 Local governments in Appalachian Kentucky, Virginia and Tennessee are warming up to President Obama’s coalfield economic plan "to spend $1 billion over five years in an effort to help areas hurt by a sharp downturn in coal jobs," Bill Estep reports for the Lexington Herald-Leader. "The money would be used to repair damage to land and water from abandoned mines, with the goal of tying the reclamation work to projects that would provide a longer-term economic boost," including agriculture, tourism and forestry. (Herald-Leader photo by Charles Bertram: The plan would repair damage from abandoned coal mines)

The Eastern Kentucky city of Whitesburg was believed to the first to endorse the Power + Plan but has since been joined by Benham, Ky.; Norton, Va.; Letcher and Harlan counties in Kentucky; Campbell County, Tennessee; and Wise County, Virginia.

"There are several pieces to the proposal from the Obama administration, including money for job training and help for entrepreneurs, grants and loans for infrastructure in hard-hit coal communities, and money to shore up the pension funds of tens of thousands of retired coal workers," Estep writes.

"Money would come from the abandoned mine land, or AML, fund," Estep writes. "Coal companies pay a fee into the fund on each ton of coal mined. The program is designed to fix problems such as landslides and water pollution from mining that took place before 1977, when Congress approved new surface mining and reclamation standards. There is about $2.5 billion in the fund, according to the Office of Surface Mining Reclamation and Enforcement. Most of the land that remains unreclaimed from historic mining is in Appalachia."

House Appropriations Committee Chair Hal Rogers, who represents the East Kentucky coalfield, "has supported pieces of the Power+ proposal, but not all of it," Estep notes. Rogers' panel "has approved funding to federal agencies for programs under the proposal such as job training for laid-off miners, said Danielle Smoot, a spokeswoman for Rogers' office. However, the proposal on AML spending would require significant changes to the federal surface-mining act and action by another committee, and the Obama administration did not submit legislative language early enough for consideration during the budget process in the House, Smoot said."(Read more)
Written by Tim Mandell Posted at 8/19/2015 02:07:00 PM