Chinese manufacturing companies flocking to the U.S. South, where it's cheaper to produce goods

Southern states that lost manufacturing jobs to China are now seeing an influx of Asian manufacturing companies moving to the South, where it has become more cost effective to produce goods, Ana Swanson reports for The Washington Post. "Keer Group, a Chinese yarn-maker, is investing $218 million in a factory in South Carolina. Another Chinese manufacturer, JN Fibers, is investing $45 million in the state. And Indian company called ShriVallabh Pittie is investing $70 million in a yarn-spinning plant in nearby Sylvania, Ga."

An index created by Boston Consulting found that "in 2004, a good that could be made for a dollar in the U.S. could be manufactured in China for 86.5 cents. One decade later, that $1 product in the U.S. would cost 95.6 cents to make in China," Swanson writes.

"The narrowing of the gap has a little to do with what's happening in America and more to do with what's happening in China," Swanson writes. U.S. workers in 2014 made an average of $22.32 an hour, compared to $12.47 in China. "But other attributes of doing business in America make up the difference in cost. For example, state and local governments offer ample tax breaks and subsidies to companies that set up shop in their jurisdictions. America’s natural gas boom has also lowered the cost of electricity, attracting energy-intensive manufacturing industries." (Post graphic: U.S. jobs from majority-owned Chinese companies) 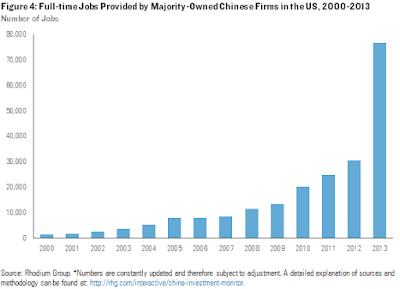 "Overcoming trade barriers and taking advantage of free trade agreements can also make a big difference: for example, yarn manufacturers might set up shop in the U.S. to take advantage of agreements with Mexico and Central America, whose factories transform the yarn into fabric and clothes that are shipped back to American consumers," Swanson writes. "And U.S. workers are relatively educated and productive, making them especially suited to advanced manufacturing, like auto parts and consumer electronics. All in all, the U.S. is now one of the lowest-cost locations for manufacturing in the developed world."

Another factor is that "as China's economy has developed, wages have risen, and so have the costs of land, energy and other raw materials," Swanson writes. From 2004 to 2014, Chinese manufacturing wages rose 187 percent, industrial electricity costs grew 66 percent and natural gas increased by 138 percent. During that same time period in the U.S., wages rose 27 percent, while natural gas costs fell by 25 percent.

"And because the industries that are returning to the U.S. are heavily automated, they won't provide anywhere near the number of jobs that manufacturing facilities did in past decades," Swanson writes. "The Economic Policy Institute, a left-leaning think tank, estimates that the U.S. trade deficit in goods with China eliminated or displaced 3.2 million American jobs between 2001 and 2013, three-fourths of which were in manufacturing. And that's not to mention the millions of manufacturing jobs that were lost to automation and offshoring in the decades before that." (Read more)
Written by Tim Mandell Posted at 8/05/2015 01:22:00 PM