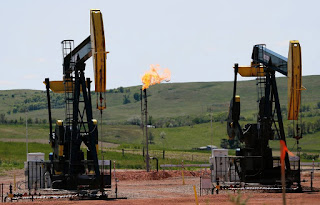 The Obama administration on Tuesday released proposed requirements to reduce "the emissions of heat-trapping methane from the nation’s booming oil and gas industry by 40 percent to 45 percent over the next decade," Ken Ward reports for the Charleston Gazette-Mail. The Environmental Protection Agency proposal is actually a combination of four rules, guidelines and plans. (Associated Press photo: Oil and gas wells are a major source of the greenhouse gas methane)

EPA "said methane, the key constituent of natural gas, is a potent greenhouse gas with a global-warming potential more than 25 times greater than that of carbon dioxide," Ward writes. "Methane is the second most prevalent greenhouse gas emitted in the U.S. from human activities, and nearly 30 percent of those emissions come from oil production and the production, transmission and distribution of natural gas, the EPA said."

EPA said its "new proposals would complement rules issued in 2012 and would extend emissions-reduction requirements further 'downstream,' to cover other equipment in the natural gas transmission segment of the industry," Ward writes. "Among other things, the EPA wants gas companies to find and repair leaks, limit emissions from new and modified pneumatic pumps used throughout the industry and limit emissions from several types of equipment used at gas-transmission compressor stations and storage facilities."

Critics say the proposal, which "could cost the industry between $320 million and $420 million in 2025 and have health-related and other benefits of about $460 million to $550 million," is unnecessary because methane emissions are already falling, even as production skyrockets, Ward writes. Critics also say the new requirements could cost jobs and threaten the development of natural gas in states already struggling economically.

A recent study from Colorado State University researchers published in Environmental Science & Technology said that "methane emissions from natural gas 'gathering' facilities, which collect gas from multiple wells, are 'substantially higher' than they previously were believed to be," Ward writes.
Written by Tim Mandell Posted at 8/19/2015 02:07:00 PM