Report says Oklahoma should lead fight against man-made earthquakes, but doesn't say how 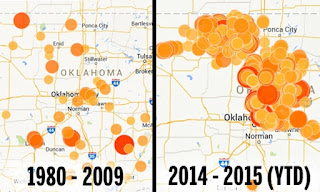 A 150-page treatise released on Monday by Oklahoma oil and gas regulators about how to deal with earthquakes linked to the industry failed to mention any specific recommendations for how to solve the problem, Mike Lee and Mike Soraghan report for EnergyWire. Oklahoma, which in 2014 led the lower 48 states in earthquakes with 585 of magnitude 3 or higher, surpassed that total in August, with 650 reported this year. Oklahoma averaged about two earthquakes per year from 1975 to 2008, before the oil and gas boom hit the state in 2009. Until this year, the state denied the link between seismic activity and the oil and gas industry. (The Nation graphic)

"The report was developed by States First, a partnership between the Interstate Oil and Gas Compact Commission (IOGCC) and the Groundwater Protection Council (GWPC)," Lee and Soraghan writes. "It reflects the strong desire of state officials to keep the federal government out of the regulation of oil and gas. That sentiment is avidly shared by the oil and gas industry."

"The report is significant because it acknowledges the link between energy developments and induced seismicity, Scott Anderson, senior policy director for the Environmental Defense Fund's climate and energy program, said in a statement," Lee and Sorghan write. "It 'should put to rest the idea that industry and state regulators deny wastewater injection can cause earthquakes,' Anderson said." (Read more)
Written by Tim Mandell Posted at 9/29/2015 01:39:00 PM