Confederacy museum, struggling to find a new site, plans to split into three 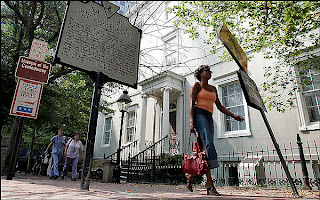 Struggling from "image and financial problems," the Museum of the Confederacy in Richmond, Va., is making another attempt to preserve its collection with a plan to create exhibits at three battlefield sites in Virginia, reports Neely Tucker of The Washington Post. (Photo of "The White House of the Confederacy" by Steve Helber, Associated Press.)
The $15 million plan would divide the collection of the 117-year-old museum among rural sites at Chancellorsville, Appomattox and a third battlefield to be determined, Tucker writes. The battlefield exhibits would open by 2011, while the current museum would close, officials told Tucker. The "White House of the Confederacy," the home and headquarters of CSA President Jefferson Davis during the Civil War, would stay open. But funding for the project has not been secured.

"Our mission is to use our artifact collection to educate the public, and you have to get people to see the stuff in order to do that," S. Waite Rawls III, the museum's executive director, told Tucker.

Earlier this year, the museum sought to move its entire collection to a new location, and looked at 10 sites, all of which remained confidential except Lexington, Va., where the city council approved the idea 4-2 after hearing opposition from African Americans. The Rockbridge Weekly writes that "opponents of the Museum of the Confederacy locating in Lexington must be breathing a sigh of relief this week." That article goes on to say that "substantial opposition developed" as Lexington sought to lure the museum.

The museum's current site, next to the "White House of the Confederacy," has been surrounded by a new medical complex, and it is large enough to display only 10 percent of the museum's total collection of about 14,000 artifacts, The Roanoke Times reports. With the change in the neighborhood and the completion of the more politically correct American Civil War Center, attendance has dropped from a peak of 91,000 annually to 44,000 last year, the Associated Press reports. An audit also revealed the museum's endowment had been drained to cover operating costs, The Washington Post reports.
Written by Al Cross Posted at 9/06/2007 12:34:00 PM