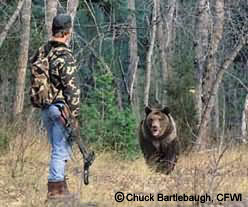 UPDATE: A rabid bear was shot near Grantsville, Md., in the far western part of the state, on Aug. 29, Joe Holley of The Washington Post reports. (Read more)

After late-spring frosts reduced a staple of bears' summer diets, the bruins have gone looking for food in backyards and other populated spots in West Virginia, reports Tara Tuckwiller of The Charleston Gazette. With bear-hunting season beginning soon in West Virginia, and campers and hikers hitting the trails, too, the state's Division of Natural Resources is warning people to take caution to avoid bears.
Bear-alert signs greet visitors and trash cans have been moved to cages in the Monongahela National Forest, where more bears have been reported than usual, Tuckwiller writes.

“The bottom line is that people enter the natural habitat of black bears when they go into the woods in West Virginia,” Dick Hall, supervisor of game management for the DNR’s wildlife resources section, told Tuckwiller. “We can focus on removing problem bears from campgrounds if necessary, but people need to recognize how to keep themselves safe as they enjoy the wild lands of the state." (Read more)

Some tips from the DNR include keeping food in an airtight container and never storing any food in a tent, carrying special bear pepper spray (the human type is not effective on bears), slowly backing away if a bear approaches, or shouting and waving a shirt or other object to look bigger if the bear continues to draw near. For more tips, go to the DNR's Web site or to http://www.bebearaware.org/. For information about Tennessee's black bear hunting season, go here. For Virginia's, click here. Kentucky has no bear season.
Written by Al Cross Posted at 9/04/2007 01:57:00 PM