'Music of Coal' chronicles the history of Appalachian mining in song 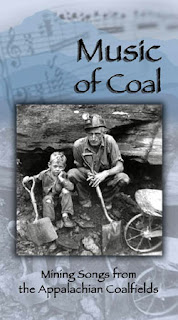 With 48 songs on two CDs and a 76-page hardcover book, the "Music of Coal" offers a comprehensive look at "labor struggles, union organizing, unemployment, economic depression, environmental impacts, mining lifestyles and the heritage of mining," reports The Coalfield Progress in Norton, Va.

Hannah Morgan writes that the compilation came from three years of work across the region that began in 2005 when Paul Kuczko, executive director of the Lonesome Pine Office on Youth, had students collect information about local coal camps for a book to celebrate the 150th birthday of Virginia's Wise County.

Morgan reports the process identified the desire for such a CD. A group of about 20 people from the nearby regional arts center Appalshop, the Ralph Stanley Museum, the Heart of Appalachia Tourism Authority and other agencies "joined with county officials, historians and various colleges and foundations to form a committee to turn the idea into a reality," she writes.

Along the way, the group found the songs were born from sorrow. "We were all about ready to commit suicide because they were so depressing," Kuczko told Morgan. To balance the blues, she writes, the group added some upbeat tunes as well as some work from current local artists. The "Music of Coal" is available at $35 each, and Kuczko said he profits from the project will go toward helping local youth record their own music, Morgan writes. (Read more)

In another piece, Morgan continues to explore the music of Appalachia, this time as she finally learns to play a mandolin that had been sitting in her home for a year. (Read more)

Cheryl Truman of the Lexington (Ky.) Herald-Leader wrote a review of the collection called "Mountain songs in a miner key," which includes audio clips of a few of the songs.
Written by Al Cross Posted at 9/06/2007 12:17:00 PM