In need of workers, American farmers move operations to Mexico 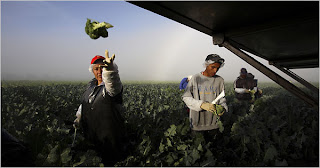 Since American farmers now risk serious legal troubles if they are caught with undocumented workers, some are taking their crops to a place where they know the workers are legal -- Mexico. (Photo of American-run broccoli farm in central Mexico by Janet Jarman)

In an article from The New York Times, Julia Preston reports from Celaya, Mexico, and describes American farmers who have taken their operations here. She points to signs that it might be a growing trend. She reports that the Western Growers, an association representing farmers in California and Arizona, surveyed members over the phone and found that 12 large agribusinesses "acknowledged having operations in Mexico reported a total of 11,000 workers here."
“It seems there is a bigger rush to Mexico and elsewhere,” Tom Nassif, the Western Growers president, told Preston, adding that that Central American countries also are drawing American farms. Although there are no official stats on American farms in Mexico, Preston reports that U.S. Sen. Dianne Feinstein, D-Calif., has "displayed a map on the Senate floor in July locating more than 46,000 acres that American growers were cultivating in just two Mexican states, Guanajuato and Baja California." There, American growers have a steady and cheap workforce, which they pay about $11 per day, instead of $9 an hour back in California.
Of the 2.5 million farm workers in the United States, an estimated 53 percent are illegal immigrants, according to the Department of Labor. Preston reports that growers and labor unions say "as much as 70 percent of younger field hands are illegal." With illegal immigration targeted by authorities, farmers must find a way to maintain their workforce, here or abroad.
“I’m as American red-blood as it gets,” Steve Scaroni, one of those American growers, told Preston, “but I’m tired of fighting the fight on the immigration issue.” (Read more)
Written by Al Cross Posted at 9/06/2007 12:32:00 PM