A source for social change in perhaps an unlikely place, the Highlander Center turns 75 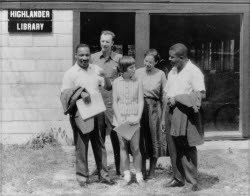 Starting in 1932, the Highlander Folk School (now the Highlander Research and Education Center) brought leaders to the mountains of Tennessee to learn and share methods for improving social justice in America. On its 75th anniversary, author Jeff Biggers highlights the role the school played in the civil rights movement. (At left: Photo of Martin Luther King, Pete Seeger, Charis Horton, Rosa Parks and Ralph Abernathy at Highlander's 25th anniversary in Monteagle, Tenn.)
In an essay at NewAmerica Media.com, Biggers calls the school "an extraordinary American institution that recognized the ability of mountaineers and Southerners to determine their own fate in volatile times." It overcame many obstacles, including trumped-up charges that forced it to close. It relocated from Monteagle, Tenn., and reopened on Bays Mountain east of Knoxville, as founder Myles Horton said, "You can't padlock an idea."
He writes of the impact the school had on many prominent figures in the movement, including Rosa Parks, who attended a workshop at the school in 1955 just months before refusing to give up her seat on a bus in Montgomery, Ala. Biggers quotes from a Studs Terkel interview in which Parks recalled how the Highlander experience was a first for her: "We all were treated equally and without any tension or feeling of embarrassment or whatever goes with the artificial boundaries of racial segregation."
Biggers describes his essay as an attempt to excavate the Highlander School's legacy "from the rubble of our increasingly sanitized history lessons," and it offers a clear but succinct discussion of what the school, its leaders and participants meant to the movements for civil rights and social justice in the United States.
Written by Al Cross Posted at 9/04/2007 02:03:00 PM