Roanoke reporter, who ranged to the coalfield and the far tip of Virginia, calls it a career 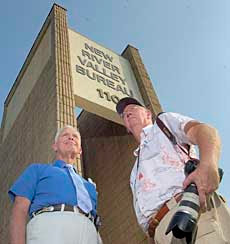 Paul Dellinger, at left with photographer and fellow Roanoke Times retiree Gene Dalton, retired Friday after 44 years as one of the hardest and longest working reporters in Appalachia. His career illustrates changes in the region and newspapers over four decades.

Dellinger (pronounced with a hard "g") hired on at the Times' Southwest bureau in 1963. He was 25. "For the next four decades, Dellinger covered Southwest Virginia like a blanket -- in the beginning with reporter Hazel Brown (now deceased), and in later decades alone. One of his rare criticisms of his longtime employer is that it cut back coverage of the far southwest in the 1990s. "The Roanoke Times got all sorts of accolades for its coverage" of coal in the late 1980s, he said. "The next year, they stopped covering anything out there." But Dellinger still lives in Wytheville, site of the now-closed bureau.

When Dellinger was nearing 62, the age at which he could begin collecting limited Social Security benefits, his wife, a former reporter, asked him what he might do after newspapers. "He said, 'What I'm doing,' " she told Times writer Kevin Kittredge, who summed it up this way: "Translation: There was no 'after newspapers.'

"Seven years later, changes in the newspaper world, and recent inducements offered to older workers to retire, have convinced him otherwise. All newspapers face a murky future these days, as they try to balance the print edition with the Internet, and The Roanoke Times is no exception. Ask Dellinger what he thinks about such changes, and his answer is succinct: "I think it's time to retire." And what does a man who has written news stories for 44 years do when he retires? He keeps on writing, of course." Dellinger writes science fiction, and has written radio scripts and a play. (Read more) For a video showing Dellinger at work, and reflecting on his career, click here. For his farewell piece, click here.
Written by Al Cross Posted at 9/02/2007 02:29:00 PM