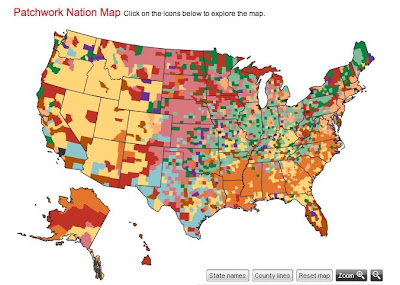 Since the 2000 presidential election, red-and-blue colored campaign maps have become a fixture of television and newspaper coverage. The Christian Science Monitor has created a unique online campaign map by adding a lot more color-coded categories and offering more nuanced information than simple party affiliation or recent polling trends. "Instead, the online feature divides the entire nation up by counties, offering descriptions of each as a 'community' based on income, economy, population, race, religion and some past voting trends," reports Joe Strupp of Editor & Publisher. "The site then monitors which counties the top three candidates are visiting and offers data on which kinds of communities they are targeting."

Patchwork Nation is funded by a $250,000 grant by the John S. and James L. Knight Foundation, and as part of that grant, the feature's information is available free to any news outlet. "You can take it and apply it to your state, your metro area and even your county," Dante Chinni, a former Project for Excellence in Journalism staffer who is running the Web map, told Strupp. "We hope this lets journalists in general use this data and lets the citizens on the street know more about it, too." (Read more)

The name comes from the title of a book by scholars James Gimpel and Jason Schknecht on the connections between geography and voting choices, reports Jennifer P. Brown of the Kentucky New Era in Hopkinsville, one of the communities highlighted by the Monitor. Gimpel, a University of Maryland professor, provided much of the data used by the online feature. (Read more)

Here are the 11 categories and their representative communities, as well as some links to local newspapers in the smaller ones:
The site is useful, especially its tracker of candidate appearances and the varying speeches they give based on audience. And since it's meant to be used by all news outlets, by all means take a look. The Web site is www.csmonitor.com/patchworknation.
Written by Tim Wiseman Posted at 3/31/2008 11:31:00 AM

They also have a page on Facebook which posts recent articles and blogs on Patchwork Nation.